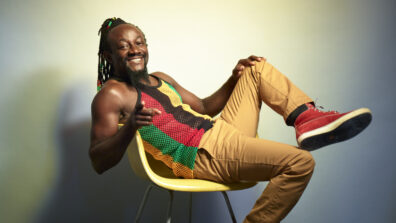 On “Life During Wartime,” the first single from Talking Heads’ 1979 album Fear of Music, David Byrne famously sang the immortal lyrics, “This ain’t no party, this ain’t no disco…no time for dancing…” Yet all those anti-fun declarations go gleefully out the window when Mystic Bowie, aka the “Head Dread,” takes the stage, re-imagining and infusing fresh life into the Talking Heads’ classic catalog with his high octane mix of roots reggae, ska and lover’s rock (aka “romantic reggae”).

Since debuting his musically revolutionary Talking Dreads project live at the High Times Music Festival on the beach in Negril in late 2015, the charismatic Jamaican-born singer and performer has electrified audiences at more than 300 shows across North America – spinning the heads of initially skeptical Talking Heads fans, and getting everyone else grooving along to the infectious, joyous rhythms and jubilant spirit of his native island. Considering the success of these events, it was only a matter of time before Bowie – who has lived in the Northeastern U.S. for many years – headed back to his cherished homeland and set up shop at the famed Barry O’Hare Studios in Ocho Rios. He gathered old friends he had played music with since childhood, along with younger musicians, legendary Jamaican artists and other surprise guests to capture all the magic of his live performances on the epic, 13 track recording Mystic Bowie’s Talking Dreads.

“Talking Dreads is much more than a cover band,” Mystic says. “I am very much drawing on my own musical culture and history to make these amazing songs my own, while at the same time preserving the integrity of the Talking Heads songs. I’ve always felt that reggae’s dance-inspiring, feel good vibe is universal, as are many of the band’s songs. And don’t forget their intelligent, powerful lyrics, which are fun to sing and shine fresh light on through this new fusion of styles. It took a lot of effort to deconstruct and dissect each song to make it work seamlessly with my singing and performance style. I removed all the instrumentation, kept the story and words, then created my own reggae, Caribbean and tribal feel and
married those two elements – then brought back a few of the melodies that captured my attention back in the day.”

Mystic can trace his passion for all things Talking Heads back to his early days performing at hotels in Jamaica, when he heard “Wild Wild Life” – but his connection to the legendary new wave band goes much deeper. His close personal and professional relationship with Chris Frantz and Tina Weymouth, founding members of Talking Heads and Tom Tom Club, began when he joined the latter group as a singer in 1996. He appeared on their 2000 album The Good, The Bad and the Funky and performed with them for nearly 20 years. Mystic’s first spark of inspiration for the concept that evolved into Talking Dreads began during his time with Tom Tom Club, when there were attempts by certain entities to secure a new Talking Heads album and reunion tour.

“I was already fantasizing about being a backup singer,” Mystic laughs, “but when that hope was not realized, I thought about my own lengthy solo career and my work with Chris and Tina and mused, ‘Why not marry the two ideas, my reggae culture and heritage and Talking Heads Music and lyrics?’ I kept this as a secret for eight years and then went to Berklee College three years ago, recruited a handful of students to jam with me and started reconstructing some of the band’s classic songs. My only criterion was that the kids were familiar with the band and were reggae fans.”

After creating rough recordings in a Berklee rehearsal room, Mystic moved to a pro studio in Boston to create a fully produced demo. The demo featured 11 songs that spanned the entire Talking Heads’ discography, starting with early favorites like “Psycho Killer” and “Pulled Up” and continuing with their best known hits such as “Burning Down the House,” “Crosseyed and Painless,” “Houses in Motion”; and brilliant but more obscure gems like “This Must Be The Place.” He got an instant “thumbs up” from Frantz and Weymouth, then ran it by Seymour Stein, the music industry mogul who had signed Talking Heads to his label, Sire Records, and helped make them superstars. “Seymour’s exact words were, ‘Why
the hell didn’t I ever think of this?’ When I asked for his blessing, he said, ‘On one condition: that you include ‘Love, Building on Fire,’ which is the song he heard them sing at CBGB’s in New York that ultimately inspired him to sign them.”

“I decided to go with all Jamaican musicians,” Mystic says, “because there was always the risk that if I worked with American musicians who were big Talking Heads fans, they might lean towards the original style and melodies, and I wanted to make the album authentically Jamaican. So I featured a lot of these artists from the island and legitimized the entire process to be accepted and understood by Jamaicans. The rest of the world knows Talking Heads, so they’re going to catch on with the lyrics easier. In the Caribbean, you have to give them that thing that’s going to attract them to it, and that was their cultural genre attached to these songs. In the studio, I would make sure everything was authentically Jamaican, but also make sure it was true to the Talking Heads’ vibe, I would run ideas past Frantz and Weymouth.”

Mystic complements the 11 Talking Heads re-imaginings on Talking Dreads with his own unique, Jamaica-fied spin on two songs originated by other artists that are near and dear to his heart including “Piece of My Heart” — best known for its hit version by Big Brother & The Holding Company featuring Janis Joplin, and the Grateful Dead’s “Shakedown Street.” Mystic recalls that while growing up, his late mother, a single mom, worked all day long in the fields. When she was upset or in a bad mood, she would
sing “Piece of My Heart” for comfort. He recorded this as a personal tribute to her.

As for “Shakedown Street,” let us allow Mystic’s brilliant way of weaving a narrative take over: “When I was a teen performer at hotels, a lot of musicians would be nearby hanging out on the beach. I remember one of them being friendly to me one day, showing me how to play a few chords on his guitar. He taught some other local kids as well. Much later in my life when I was living in Connecticut, I was talking to some friends about the Grateful Dead. When they showed me a picture of Jerry Garcia, I knew that was the musician with the curly afro on the beach who gave me that song to play. Besides that reference, the lyrics of the song are dear to me and, in some ways, tell the story of my life.”

Another classic Mystic tale is his recollection about encountering musical legends without even knowing who they were when he was a young musician in a mento (Jamaican folk) band that had a gig at the Junkanoo Festival in Nassau, The Bahamas. When he was 13, he won a contest sponsored by the Jamaican Cultural Development Commission, and began playing with the renowned group at local hotels; and later at festivals in Peru, Mexico and The Bahamas. At night, while the other members were out
talking to girls, he wandered off and happened upon Compass Point Studios, which was founded by Chris Blackwell, owner of Island Records. In the late 70’s and early 80s, this was a hotbed of superstar recording activity – and the sight of musical instruments made Mystic hang around as long as he could. Everyone from Grace Jones, the Stones, U2 and James Brown recorded there.

One of the funkier elements of the Compass Point story finds him in the presence of Frantz and Weymouth back then. Years later, when he was living in Fairfield, Connecticut, he needed a backing band for a Mardi Gras show he was hired for at Tramps in NYC. The promoter provided him with an all-star band that included Frantz and Weymouth. Mystic went to their house for a rehearsal, but they didn’t recognize him as the young boy from Compass Point.

Even better was his “then and now” encounters with the late Keith Emerson: “At the end of each night, his gentleman with a British accent gave me rides on his motorcycle. I had no clue he was a famous musician. One night, he was about to give me a ride when a drunk guy jumped on. I grabbed the guy by his shirt and yanked him off. I was afraid so I ran back to my hotel room. Years later, I was coincidentally performing at a film festival in British Columbia with Keith. When I walked in to say hi, Keith recognized me from all those years ago and said, ‘Nice to meet you, my ass.’ He told me that that drunk guy was none other than Ringo Starr. We had a good laugh and we hugged and did a great show.”

Get Mystic talking about his heritage as a member of the Jamaican maroon tribe, and he will start a deep discussion about its indigenous tribal music forms (Myal and Pucomina), and an 18th Century history lesson about his ancestors, who escaped from slavery on Jamaica and established free communities in the mountainous interior, known as Cockpit Country. Even as he has lived in the U.S., his memories of an impoverished upbringing and limited educational opportunities prompted him to help make the future brighter for the Jamaican children of subsequent generations. In 1991, he began purchasing and shipping school supplies in large quantities to the island. The charitable organization he launched that year became known officially seven years ago as the Mystic Bowie Cultural Center. As a registered non-profit, the organization can raise more funds to continue the flow of school supplies.

Mystic has been awarded two Certificates of Special Recognition from The Overseas Maroon Council, and the Accompong Primary and Junior High School in Jamaica for his efforts. Two years ago, he opened the Mystic Bowie Accompong Library and has stocked it with more than 15,000 books and 16
computers. An open air space is used to hold after school programs and primary school graduations. He is the founder of the Maroon Youth Culture Group, a gathering of young singers, chanters, drummers and
dancers, that reflects his commitment to sharing the art of music beyond the stage. Mystic has also been named the reigning “Minister of Youth and Culture” for his beloved tribe.

“I am very committed to the Maroon traditions and passing these down to the younger generation, along with the principles of what it means to be part of our tribe,” he says. “No matter where I am living or performing in the world, I am entrenched in these sacred roots, and am building a home there where I can retire someday. There are millions of Maroons that live abroad, and I love to use music to draw attention to where I come from and how it has shaped me. It’s all about community and caring for one another.” He continues: “That’s also the sense I felt when I was calling on all these amazing Jamaican musicians to participate in the recording of Talking Dreads. I am so appreciative that they saw me as worthy of their
time and talents. Both live, and with the album, I enjoy putting myself out there and expressing my love for this great music, hoping people will continue to sing along and dance and appreciate what I add to the legacy of the Talking Heads. I give 100% thanks to that band for their extraordinary artistry and an enduring legacy that has inspired me throughout my life.”